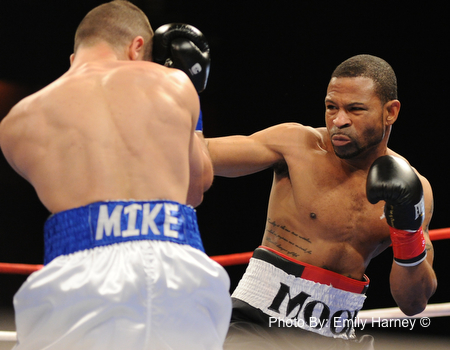 NORWALK, Conn. – Shakha Moore has been preparing for his next fight since he was 12 years old. Now 36, the Norwalk native and father of two faces a battle that far exceeds anything else he has done in his 16-year, 31-fight professional career.

Moore will face Derek Silveira for the USA New England welterweight title on May 19 at the Dorchester Armory in Boston. Moore lost his last two fights, including a unanimous decision to Mike Arnaoutis on Feb. 10. His last win came April 9, 2011, with a unanimous decision over Noel Garcia.

No fight, however, has meant more to Moore (11-16-3 for his career) than the upcoming one against Silveira. This is the one he has dreamed of since he strapped on the gloves. “My body’s not saying give it up yet,’’ said Moore, who hired Norwalk’s Marvin Tyler as his manager in February. “I still have the same passion for it. I’ve still got some things to prove.”

Moore, who began with Junior Olympic fights at age 15, beat Santos Luyandos in his pro debut May 11, 1996. He has fought at the casinos in Connecticut and in Atlantic City, N.J.; on national television; and at outposts in West Virginia and New York. Moore went twice to camps held by Roy Jones Jr., one of his boxing idols, and also fought for the International Boxing Council’s International welterweight title in 2005. He also lost in the finals of a bout that could have sent him to the Olympic Trials in 1996.

But his record is not an accurate reflection of his career, Moore says. He said a former manager coaxed him into fights for which he was not ready, and he also lost a few decisions when fighting opponents on their own turf. “I shouldn’t have been fighting in the opponent’s back yard,’’ Moore said. “A lot of the fights were always close. But when you’re fighting someone in their hometown and it’s close, guess who’s going to get the decision?’’

The most obvious example, Moore said, is a six-round fight in 2005 in Saratoga, N.Y., when he lost a decision to Wayland Willingham of Albany. The scores were 39-37 on each of the judges’ cards. “I knew the way that was going down,’’ Moore said. “I also know that I beat him on points.”

He grew up boxing with Travis and Tarvis Simms, longtime pros who made their marks on the international stage. Moore became a certified personal trainer and works at LA Fitness in Norwalk. He spars in Bridgeport and also works at the Training Floor in Stamford, where he teaches boxing to young students. His son, Shakha Jr., played basketball at Brien McMahon High School and will attend the upcoming fight with Moore’s wife, Ilka, and their daughter, Angelis, 4.

“I’m just going to go out there and wreak havoc,’’ Moore said. “I can’t let the judges see him hitting me. I have to let my fast hands take over and get to him.”