The Truth About Cranberries 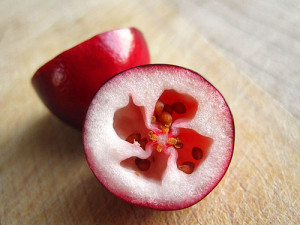 As we get ready for the holidays, cranberries take a special place of honor at our dinner table. For most people, this means buying canned cranberry sauce. Cranberries are actually a year-round business, with over 800,000 tons of fruit grown annually. Harvest is a short few weeks in the fall, and only 5% of cranberries are sold as fresh. The rest are combined with other ingredients to become sauce, juice, or dried cranberries.

Cranberry is both sour AND bitter. If you’ve ever tasted a fresh cranberry, or tried to drink 100% pure cranberry juice, you know what we’re talking about. The chemicals responsible for this are called tannins, and they are also found in smaller amounts in other fruit, mostly unripened.

How did such an unpalatable fruit gain so much success?

From an evolutionary perspective, fruits are sweet in order to attract animals, who proceed to eat them and distribute seeds. But cranberries are not tasty enough for most wild animals. n fact, they are less than 4% sugar. So how did the cranberry promulgate itself?

The secret is in the cranberry’s anatomy. Due to an air pocket in its center, a cranberry can float in water. The evolutionary result is that cranberries grow in lowlands near water sources. Mature fruit fall off the vine, and are transported to another location to set up shop. No need for help from the animal kingdom.

Native Americans found cranberries useful in meat preservation and as a medicine. They shared cranberries with the Pilgrims. The pilgrims started making sauces to accompany meats and thus a small agricultural pursuit began.

Fast forward to the late twentieth century. With oversupply and relatively limited demand for cranberry, smart marketers started looking for ways to sell cranberry year round. Harvesting techniques exacerbated the problem of fresh cranberries, as most growers switched to “wet picking” by mechanical means. Cranberry fields are flooded, causing the berries to float. Machines automatically harvest the berries, bruising them and rendering them unfit for sale as fresh.

Cranberry products such as cran-juices began infiltrating the market. When raisins became a hit, dried cranberries infused with sugar appeared on supermarket shelves as well. The only problem is that the amount of sugar added is very high. Cranberry drinks tend to have more sugar added than colas!

The health benefits of cranberries have also made it a mainstay of the nutrition circles. With very high antioxidant levels, and a potential to stave off bacteria in the urinary tract, it’s a no-brainer to recommend cranberry products as healthy choices.

And thus, from humble beginnings in northern bogs, cranberries have successfully morphed into an American icon.”Fooducate”