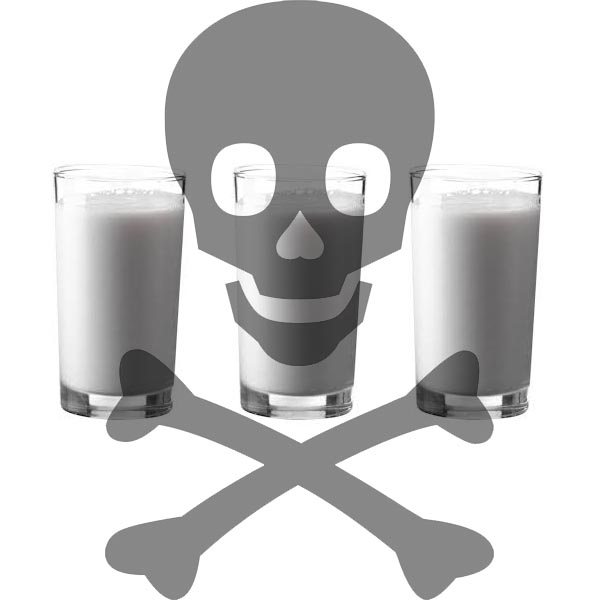 A surprising study on milk is taking the nutrition world by storm this week. It claims that, contrary to current beliefs, milk consumption increases fractures in women and decreases life expectancy in both men and women. Researchers in Sweden tracked over 100,000 men and women for 2 decades and found that milk, but not cheese or yogurt, can be dangerous to one’s health.

The study, published in the prestigious BMJ, found a correlation between consumption of 3 or more glasses of milk per day, and an increase in mortality. For example, avid milk drinkers were more prone to cancer and cardiovascular disease compared to non-drinkers.

The scientists hypothesize that the reason could be oxidative stress induced by D-galactose, a simple sugar that is created when lactose, the naturally occurring sugar in milk, breaks down in the body. In animal studies, injecting mice with D-galactose led to chronic inflammation, neurodegeneration, and decreased immune response. Since yogurt and cheese are low in lactose, they were not implicated in this study.

As you probably know, current Dietary Guidelines for Americans recommend a consumption of 3 daily servings of dairy – the equivalent of 3 cups of milk. So what should a consumer make of this study, which stands out in stark contradiction to many other studies on milk?

One thing to keep in mind, is that this was an observational study that had people fill in a food frequency questionnaire. These tend to be extremely inaccurate. For example: the people who drank a high quantity of milk consumed 500 calories a day more than their counterparts, but their average weight stayed the same. When data points are so inaccurate, it could lead to the wrong conclusions.

We reached out the National Dairy Council to get their take on the study. This is an edited version of an email response from their spokesperson, Greg Miller, PhD:

“The health benefits of drinking milk have been well documented by decades of nutrition research, and are backed up by the nutrition and science community. This includes the National Osteoporosis Foundation, U.S. Surgeon General, National Institute of Child Health and Human Development, and many other leading health organizations.

This study is confounded and limited, and we cannot draw any conclusions from it. The overall evidence to date does not support the conclusion of this one study and in fact indicates that milk is beneficial for bone health, healthy weight, and reducing the risk of several  important conditions including  cardiovascular  disease, hypertension and colorectal cancer with no adverse effect on mortality.”

Our take on the matter – if you enjoy milk and dairy products, keep on consuming them. If you don’t, why force yourself? Just make sure to get your essential nutrients from other nutrient rich foods. Milk is certainly not the only source of calcium in the food world, it just has a powerful marketing machine behind it.